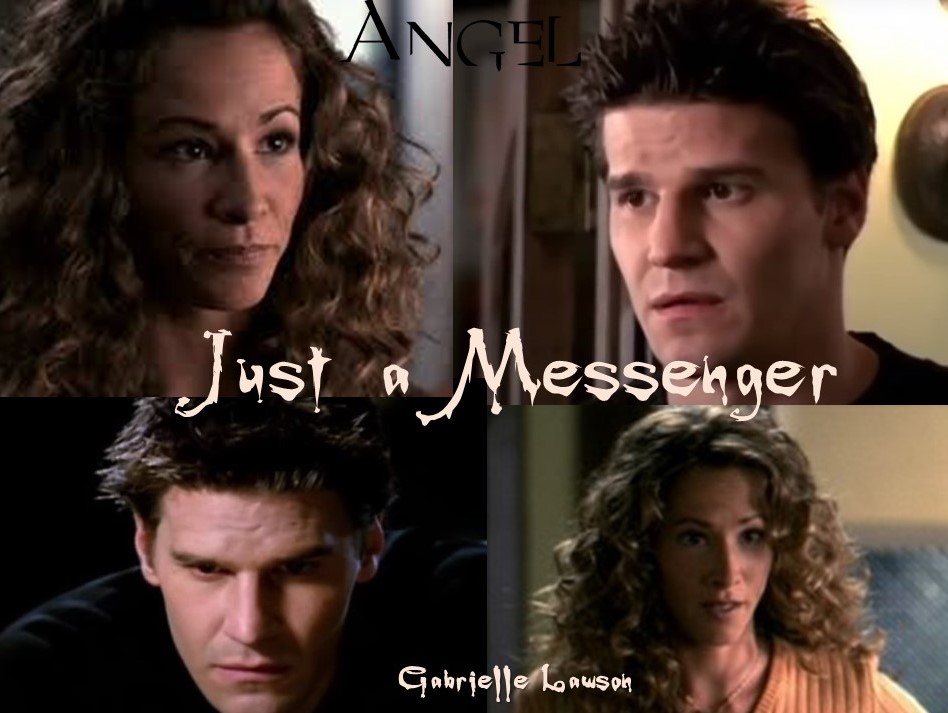 Disclaimer: Joss Whedon, aka the Evil One, and his minions at Mutant Enemy own Angel, the characters, and the backstory of this vignette. Not that they deserve them. I just borrowed them for my own uses. The story here is born of my own imagination and should be treated as such.

Author's Note: This is a vignette, a scene which is alluded to in a larger story called Close To Home...So Far Away.

She must have known he was coming, because she told him to come in as soon as he knocked. He tried the door. It wasn't locked, so he let himself in.

She was sitting on her couch, and didn't even look up to see who had entered. She had a large manila envelope. She was staring at it. Her knuckles were white, and the envelope was starting to buckle where she gripped it.

"Harry?" Angel ventured. He wasn't even sure if he should call her that. Doyle had called her that.

Her words were deliberate as if she were holding something back. "What happened?"

Angel didn't know where to start. He'd been trying to figure that out the whole way over. He was disappointed with what finally slipped out of his mouth. "How did you know?"

Still not looking at him, she held up the envelope. "He had a will," she replied, more softly. "I guess he never got around to changing it. What happened?"

Angel wasn't sure how much she knew. What had Doyle told her? About either of them? Did she know he was a vampire? Did she know about Doyle's visions or how he first got them?

She turned her head, finally seeing him. "He told me about you, if that's what you're worried about."

Angel took a breath, actually relieved. He trusted her. Because Doyle had. "He saved us," he finally said, starting at the end, at the one point he always came back to.

Her eyebrows dipped and her eyes glistened with tears she was resisting. "Saved you how?"

Now he would start at the beginning and go full circle back to where he'd started. "He had a vision of people hiding, so we found them." He told her who they were and why they had been hiding. He told her about the Scourge just as Doyle had, by telling her about Lucas and the Brachen he'd turned away. He told her how Doyle was terrified of the Scourge because of what he'd seen. "But he went after the boy anyway, talked him into coming back. He even diverted their attention so they wouldn't find Rieff."

She couldn't hold the tears anymore and one slipped from her eye and down her cheek. "Then what?" she asked, barely managing a whisper.

"I pretended to join them," Angel replied. "Doyle stayed in demon form, and I broke his neck to prove myself to them."

Her head lifted sharply at that. But Angel had anticipated she'd be angry or misunderstand. He'd also decided to tell her anyway. She deserved to know the whole story. Well, except maybe about Cordelia. He'd leave that out.

"He woke up after the Scourge had gone and got Rieff to the ship that was going to take his family to safety."

She put the envelope down on the coffee table. "Then why do I have his will?"

He was taking too long. But Doyle deserved the time. So he told her about the Beacon and how the ship's first mate had given them up, about how he'd raced to the pier with the demons right behind him, and how they'd all gotten locked inside the hold when the Beacon came down. "I was going to jump," he said. "There was no other way. But Doyle hit me, knocked me through the chain railing to the deck below. I tried to stop him, but before I could climb back up, he'd jumped."

Angel could still see him, looking back over his shoulder, smiling. "He disabled it," he continued, though it was harder now. As he did, she got up, taking a photograph from the envelope, and went to gaze out the window. "He pulled the cables apart even as it burned him. It flashed . . . and he was gone." Her head dropped and her shoulders shook. His throat hurt. "He saved us."

Angel didn't know if that was true. Not after the Oracles. He wanted Doyle back, but he didn't want to rob him of his atonement either. Doyle had earned it. And then some. "He died a hero," Angel said, knowing it couldn't take away the pain, because it hadn't for him.

"He shouldn't even have been there," she argued. "Wasn't it enough what they did to him?"

Angel wasn't quite sure what to say.

"Not that he didn't punish himself enough." She turned, leaned back against the glass, trembling. "I know about the visions. He told me. He said, 'It's nothing, Harry. It's nothing.'" She met Angel's eyes with her own. "I was married to him. I loved him." She choked back the tears and her voice squeaked. "When he hurt, I hurt, too."

She turned away again. "Four years of that!" she cried at the window, at the Powers That Be. "He didn't deserve it! He didn't deserve to die!" She finally let the sobs come, pushing her head to the glass as she cried. "He wasn't bad," she said. "He just thought he was." She drew in a ragged breath. She stifled the sobs again. "Not like you."

Angel couldn't speak. He couldn't move. He was stuck to the floor where he was by her words. Because they were true.

"How many people?" she asked.

Angel shook his head, still unable to stop her words, her truth. How many people had he killed?

She spun around. "How many?!" she screamed at him.

Angel swallowed but his voice came out a whisper. "More than I can count."

"And you get two hundred years," she concluded, irony filling her voice. "He didn't even get thirty." She stepped toward him, her eyes shooting fire. "You can fight demons and vampires, but you couldn't stop Francis? You were there. You were the one who deserved it! You've had your life and more. He deserved his." Her knees began to shake and Angel knew she'd fall. So he went to her, held her, even as she fought him.

Her words stung, but she was right. About everything. Except that Doyle had caught him by surprise. But he should have seen it coming, he told himself. He'd already decided he was going to die before Doyle did it. Doyle was just starting on his second chance in life. Angel had had so many. "I know," he said.

"He was a good man," she sobbed, falling limp into his arms. "He couldn't see it. He thought--he thought, because of what he was, that he must be bad. But he wasn't." Angel carried her to the couch and sat down with her. "I should have stayed with him. I pushed him too hard. I should have seen what it was doing to him. I should have tried harder, helped him through it."

Angel held her to him and stroked her hair. "Maybe," he told her softly, "and maybe not. It wasn't his fault he was half-demon, but it's not your fault he chose what he did. He chose his life, Harry. And he chose his death." He closed his eyes, seeing Doyle smile again, there against the bright light of the beacon. His voice was barely a breath, when he could speak again. "And I'd have given anything to change his mind."

She couldn't speak anymore either. Angel stayed for another two hours, just holding her and letting her cry. She fell asleep and he laid her down where she was. He found a blanket on a chair and pulled it over her. She still had the picture in her hand. Doyle looked like a different person. He was young and smiling, wearing a tuxedo and holding his bride. Not a care in the world. He might have had that again, Angel thought. Maybe with Cordelia. It's what he'd deserved.

He turned off the lights and left her, making sure the door locked behind him.

Back to my Doyle page

Back to my main page.